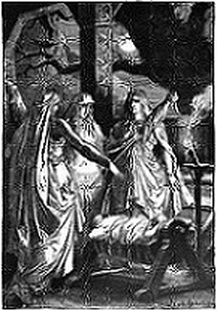 The Wurtâ, all three, are present at birth
To weave our Fate from merriment to dearth.
Urda, Werdanda and Sculd, the dark queens renowned;
Glorious ladies ‘neath the Tree, work your mysteries in us now.

That which “was” we can clearly see.
That which “is becoming” will form now in our deeds.
That which “is owed”, will be, but we cannot yet see,
We celebrate the Wurtâ, the Ladies Three, for all eternity.

The Wurtâ are the demi-goddesses of destiny. They control the destinies of both gods and men, as well as the unchanging laws of the cosmos. They are represented as three sisters: Urda ("past"), Werdanda ("is becoming") and Sculd ("owed"). They live at the base of the World Tree Yggdrasil in the realm of Enbsigart. Nothing lasts forever, and even the mighty Yggdrasil is subject to decay. The Wurtâ try to stop this process, or at least slow it down, by pouring mud and water from the Well of Fate over its branches. This magical liquid stops the rotting process for the time being. In other myths, the Wurtâ were thought to give assistance at birth, and that each person has his own personal Wurt.

There is Nothing More Metaphysical than Wodin's Ordeal on Yggdrasil 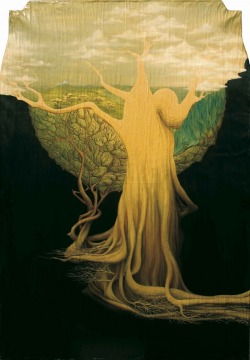 I know that I hanged on a windy tree
nine long nights
wounded with a spear, dedicated to Wodan,
myself to myself,
on that tree of which no man knows
from where its roots run.

No bread did they give me nor a drink from a horn
downward I peered;
I took up the runes, screaming I took them,
then I fell back from there.

-The Havamal from the Poetic Edda translated by Carolyne Larrington 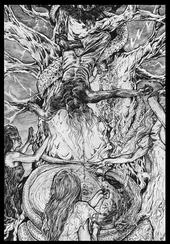 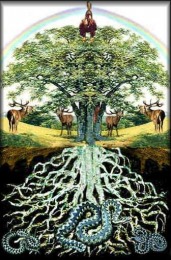 Various links to *Irminsul* that explain it so much better than I ever could:

Irminsul and the Nine Worlds 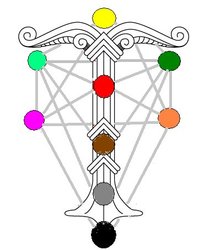 I’m going to go out on a limb here (so what else is new).  When we try to put the Nine Worlds in specific areas or regions it becomes problematic.  In dealing with the metaphysical, I believe that directional appointment is futile.  When we try to put things in certain places we are placing them there according to our physical perspectives.  Once one gets into realms beyond our knowing positioning becomes pointless.  I can compare it to what it might be like when one is buried in an avalanche.  It has been said that if one becomes buried in an avalanche one should never start trying to dig one’s self out because it’s impossible to determine which way is out.  It’s the same dealing with the metaphysical: there is no up, down, inside or out.  It just is.

I see the Nine Worlds of the Germanic Cosmos with five Worlds completing the trunk of the Tree with four worlds making up the branches.  Argue with me if you want but this is the way I see it.

So I see five Worlds as the trunk of the Tree thus:

I see the four remaining Worlds making up the foliage:

How brilliant of our ancestors to realize that there are other realms of existence!

The Human Being, Irminsul and the Nine Worlds: Tieing It All Together

It’s an easy transition to see Irminsul as a metaphor for the human body with the Nine Worlds as that which comprise our being with pathways that inter-connect.

The trunk of our bodies:

I postulate that it's possible to metaphysicaly place ourselves on the Irminsul; to draw Runes, placing them on each given sphere on the human body to gain insight on how we handle our ideals, drives, passion, challenges, etc, for self-realization.  Further, this would be possible to do for others; however, it would take quite a Runester who is totally comfortable with doing so.  I fully believe a novice (or a non-Heathen, for that matter) should never try this.